Diabetes 101: The basics of type 1, type 2 and gestational diabetes

I’ve said this before but diabetes is a serious worldwide epidemic and it only continues to get worse. While both forms of the disease are dangerous, it’s adult onset diabetes — or type 2– that is growing at a staggering rate. And it’s that type that can largely be prevented, controlled and in some cases reversed. It all starts with understanding the intricacies of the disease. Here’s a breakdown of the differences between types 1 and 2.

Diabetes is a metabolic disorder in which the body either cannot produce insulin, does not produce enough insulin or doesn’t react properly to insulin. There are two main types of diabetes: type 1 and type 2. 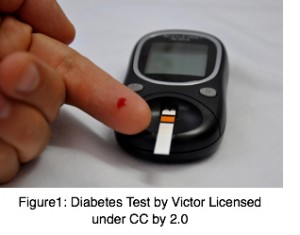 Type 1 diabetes, also referred to as juvenile diabetes, is the rarest form. The onset usually occurs before the age of 40 – mostly in children and young adults. With this form of diabetes, the body does not produce insulin because the immune system destroys the cells that make production possible.

Type 1 diabetics require insulin injections for the rest of their lives. There is no cure for the disease.

Type 2 diabetes, also referred to as adult-onset diabetes, is a growing epidemic in the United States and other westernized countries. Ninety percent of all diabetes cases are type 2. It is most commonly diagnosed during the adult years but is becoming more and more common in children. With this form of diabetes, the body does not produce enough insulin, does not react properly to insulin or both. Type 2 diabetes can often be treated with lifestyle changes and/or weight loss. Oral medication and/or insulin injections may also be necessary to treat type 2 diabetes.

Anyone can get type 2 diabetes, but there are certain factors that increase the risks including obesity, poor exercise habits, high blood pressure, age (over 45) and family history. According to the Mayo Clinic, not much is known about the risk factors for type 1 diabetes although family history and genetics play a role in that risk.

Symptoms for both type 1 and type 2 diabetes are similar, with a few exceptions, and include:

Symptoms for type 2 diabetes often develop slowly. In fact, it is quite possible to have the disease for several years without knowing it. On the other hand, symptoms for type 1 diabetes come on quickly. If you experience a combination of these symptoms, you should consult with your doctor. Diabetes can be very dangerous. If not treated, it can lead to heart disease, kidney and nerve damage, eye and foot damage, skin and mouth conditions and even death.Stay tuned for more in-depth posts about living with diabetes. And don’t forget to order my book, The Diabetes Solution! 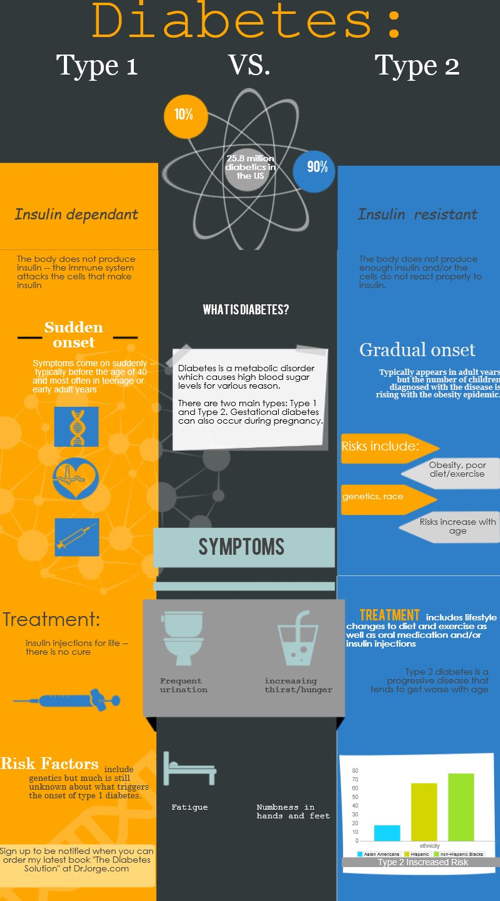