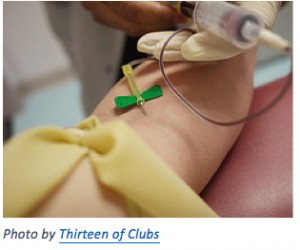 What is it that keeps people from getting tested for diabetes? I’m no psychologist, but I’d venture that while there are countless reasons for this avoidance, fear of the unknown is among the top reasons. I can’t possibly discuss every single fear, but I can give you a quick glimpse into the test itself and put your mind at ease about its simplicity.

The diabetes test does involve a needle and a little bit of blood, but in most cases it’s quick and relatively painless. There are a few different tests available:

– The AC1 test, also known as the glycated hemoglobin test, is the gold standard because it indicates your average blood sugar levels for a period of two to three months rather than a single point in time. The test itself is simple and doesn’t require any preparation — you can eat and drink normally before the test. It requires a simple blood sample and takes only a few minutes of your time. The blood sample is sent to a lab for analysis — anything greater than 6.5 percent indicates diabetes.

Certain conditions — such as pregnancy or an uncommon form of hemoglobin — make the A1C test inaccurate, however.

– A random blood sugar test examines blood sugar levels at a single point in time. It doesn’t require any preparation and results are available right away. Anything greater than 200 milligrams per deciliter is indicative of diabetes, especially when other symptoms are present.

– The fasting blood sugar test is performed after an overnight fast of at least 8 hours. Like a random blood test, this test only indicates blood sugar levels for a single point in time. Anything greater than 126 mg/dL on two separate tests results in a diagnosis for diabetes.

– The oral glucose tolerance test is the least common of the four tests and it isn’t used very often anymore. In this test, blood sugar levels are measured after an overnight fast and then periodically tested over a two-hour period after drinking a sugary liquid. Diabetes is diagnosed when levels are greater than 200 mg/dL.

I get it. Going to the doctor isn’t your idea of fun. It’s scary, time-consuming and costs some money. But routine screening is imperative when it comes to diabetes. It can be controlled and reversed, but only if it’s caught early enough. The silent and painless nature of the disease, however, means it can sneak up on you and cause countless amounts of damage and even death, if it isn’t diagnosed and treated.

I urge you to please put your fears and procrastination aside and go get tested. I promise it’s not as scary as you think.

Don’t forget to order my book The Diabetes Solution – it is full of useful tips and recipes to make for simple and delicious management of diabetes and pre-diabetes!